← Back to Directory Index

Unverferth Manufacturing Company, Inc. has been serving America's farm operations since 1948. We began with the manufacture and marketing of dual and triple wheel systems and components. The impact of this innovation is evident today on over 90% of North American farms and since expanded into the world market.

Unverferth is a leading manufacturer and marketer of tillage equipment, pull-type sprayers, fertilizer applicators, hay and grain handling equipment, and agricultural dual and specialty wheels. The family owned atmosphere which promotes pride in product quality and value is as prevalent today as it was over 65 years ago.

We invite you to explore the innovative brands and products on our websites and then visit your nearest dealer or contact us for additional information. To find out more about the Kalida, Ohio area, please visit the Kalida Chamber website. 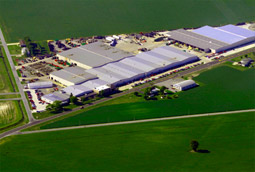 Co-founders L.G.(Lawrence) and Richard Unverferth often looked for ways to make their own and their Kalida, Ohio neighbors' farming operations more efficient. In this picture from 1938, Richard (seated) is working on one of their first innovations to mechanize the thinning of sugar beets. This beet blocker was one of their first forays into farm equipment before the official founding of the company.

Shortly after graduating high school, Richard enlisted in the U.S. Navy and served in submarine service until 1947. After the end of World War II, jobs were scarce with the return of all the servicemen. Richard and his father, L.G., armed with their passion for farming and helping other farmers, began making tractor step plates and control levers in the family barn. The two, along with other family members, would make as many tools as they had materials, and load them into the trunk of Richard's car. Richard would then traverse across the countryside promoting and selling these goods. On his return trip to Kalida, he purchased raw materials to manufacture the next batch with the proceeds from the sales. Thus, in 1948, the foundation for Unverferth Manufacturing was firmly laid. 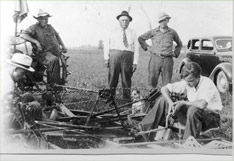 In the early 1950s, the resourceful Unverferth duo invented and began producing dual wheels for farm tractors. A small machine shop was built and the business was now firmly established. The network of dealers grew, as did sales. In 1963, after using several rented spaces for warehousing and production, building commenced at the present Kalida, Ohio site to combine offices, production and warehouse space. The company continued to focus on custom-built agricultural and dual wheels throughout the decade, and added running gear in the mid 60s. The passion of the Unverferths for developing and introducing new products to the marketplace led to the addition of the Hammer and Gump wheel line in 1965. 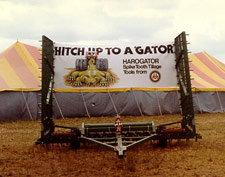 The Unverferth product line expanded in the 1970s to include Unverferth McCurdy gravity boxes, farm wagons, grain and bale elevators and refuse containers. The tillage lineup of products began in the late 1970s with the Harogator® spike-tooth tillage tool. These new product lines prospered and continued to be the focus of the company, along with wheels into the 1980s.

Products such as the Culti-Planter field cultivator, Rolling Harrow soil conditioner and Unverferth Grain Carts all premiered during the 80s. Wheels have always been at the heart of the company and the 1980s were no exception with the introduction of high-clearance narrow wheel conversions.

The late 1980s brought yet another product line expansion with the addition of Brent Products in Shell Rock, Iowa. In 1988, Unverferth introduced an industry exclusive with the Brent Grain Cart and its single corner-mounted auger. The Brent line grew into tillage products with the 1990 introduction of the CPC 2000 disk ripper followed by the HCV 2000 field cultivator in 1994.

Reduced tillage practices gained ground during the 1990s and Unverferth led these new practices with innovative Zone-Tillage products, drill fills for no-till drills, Brent high-residue field cultivators and a no-till version of its popular Culti-Planter, just to name a few. Additional tools such as the Zone-Builder implement, Tremor subsoiler and Ripper-Stripper also evolved to meet those needs.

The new millennium continues bringing new, innovative products to the marketplace in the Unverferth tradition. With the rapid adoption of bulk seed, and seeing a need to help farmers plant more acres faster, the patented Seed Runner tender was introduced. Its patented conveyor design enables farmers to quickly and gently load their planters and drills, as well as fills the dual compartment Seed Runner with the seed for speedy delivery.

From the innovative beginnings in a small farm shed, to the current-day, state-of-the-art production facilities, Unverferth Manufacturing is poised to continue growing. We look to the future using our co-founders sound philosophy of manufacturing and marketing innovative products to help our farming ”neighbors” be as efficient as possible.