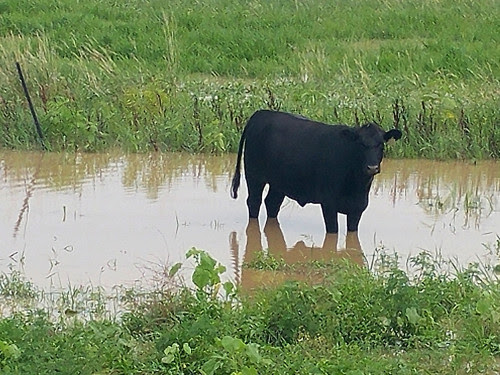 Excessive rainfall has not only hindered soybean and corn farmers’ attempts to plant, but has contributed to a near record-low level of hay to feed livestock in Ohio and across the Midwest.

The hay inventory in Ohio has dipped to the fourth lowest level in the 70 years of reporting inventory, leaving farmers struggling to find ways to keep their animals well fed, said Stan Smith, a program assistant in agriculture and natural resources for Ohio State University Extension. OSU Extension is the outreach arm of The Ohio State University College of Food, Agricultural, and Environmental Sciences (CFAES).

The situation is not much different across the Midwest, where some livestock owners are having to pay much higher prices for animal feed.

“We’re all in the same boat. There’s very little stored hay in the Midwest, and there’s been very little opportunity to harvest more. It’s a huge challenge,” Smith said.

Ideally, hay should be dry when it’s baled. But the wettest yearlong period in over a century in Ohio has delayed and even prevented its harvest. The longer hay stays out in a field unharvested, the lower its quality. And though animals can graze, having them trudge repeatedly through wet fields not only hinders the regrowth of the grasses underfoot, but also burns more of the animals’ energy.

Most affected by the hay shortage are owners of dairy cows and beef cows raised primarily to breed. Neither type of cow can graze outdoors year-round and therefore requires dry hay at times.

Hay, the general term for grasses that can be baled and stored to feed to livestock later, must dry in a field before it’s baled to keep it from spoiling when stored. In spring, hay often needs three to five days without rain to dry sufficiently. And that’s been hard to come by.

Harvesting hay when the soil is too wet and soft can do long-term or irreversible compaction damage to the soil, and can lower the productivity of future crops, Smith said.

Ohio’s hay inventory has been steadily declining in recent years, according to U.S. Department of Agriculture records. The state had 410,000 tons in May 2017. A year later, that number dropped to 260,000 tons, and in May 2019, hay levels were at 180,000 tons—less than half of the inventory two years ago.

Still, despite the shortage of hay and the higher prices farmers have to pay for it, consumer prices for meat and dairy products are unlikely to go up in the coming months, said Ben Brown, program manager of CFAES’ Farm Management Program.

That’s because, though the price of raising livestock may go up, farmers can’t bring up the prices they earn for dairy or meat products unless large numbers of them sell off their herds and significantly bring down the supply, Brown said.

For now, farmers could purchase hay from other states, but the transportation costs make that an expensive option. Instead, some in Ohio are trying to direct their animals to grazing as much as possible. And some will plant hay on fields where they were unable to plant corn or soybeans.

“The best outcome would be if we get better weather and have an opportunity to grow more hay. Then, everything would be copacetic,” Smith said. “But in the meantime, a lot of people are thinking about options for what they can do if there’s not enough feed in the barns this winter.”